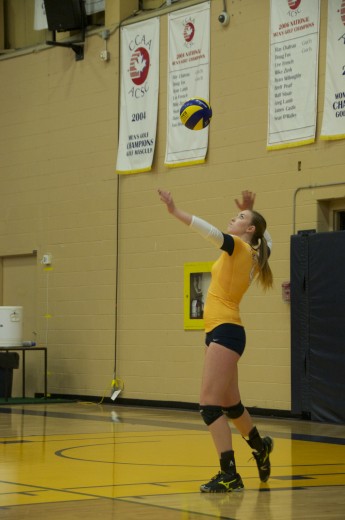 Mackenzie Prins throws up a serve during the Hawks’ victory over the Redeemer Royals.

An entertaining straight-set home win against Redeemer on Jan. 15 was the first of four wins in five days for the Hawks as they started the new calendar year.

“Certainly it’s nice to be undefeated, but for us it’s more about feeling good about the way we play,” said Hawks coach Chris Wilkins.

During busy stretches in the schedule, it is important that all 15 players are ready to play and ready to perform, he said.

The main obstacle for Humber is, “continuity and playing together,” explained Wilkins.

“For us, we’ve got our eyes on the big prize and if that means we’ve got to hit a few roadblocks along the way to do that, then so be it,” Wilkins said of the importance of a season-long undefeated streak.

The Hawks have garnered a reputation around the OCAA as the team to beat.

“If we can compete with Humber, that’s our goal, you just want to come in and compete with the best,” said Doug Veldman, head coach of the Redeemer Royals.

Humber has the best server in Ontario, according to Veldman, referring to Hawks’ Thalia Hanniman.

“(The key to success is to) always focus on our team, and not really focus on their team,” said Jocson. “Doesn’t really matter if they’re Redeemer, Boreal or any other team, we just need to focus on our passing and serving and just finishing the game.”

The Hawk’s regular season wraps up on Feb. 12, while division crossover and OCAA Championships run until March 8.