Union and CEC agree on arbitrator to settle five-week strike

Toronto lawyer and author William Kaplan, with an experienced history in arbitration, was selected to resolve the labour contract dispute between the faculty union and Ontario’s colleges.

Kaplan is a veteran arbitrator and mediator noted for his work in labour disputes involving Canada Post, Elementary Teacher’s Federation, the LCBO and the CFL among numerous others. Specifically, he has received 31 awards for his work with the Ontario Public Service Employees Union in the past.

OPSEU, which represents faculty, librarians and counsellors at Ontario’s 24 colleges, could not agree on a new contract with the College Employment Council (CEC).

The ensuing five-week strike that began Oct. 16 would be the longest in Ontario college history, with students caught right in the crossfire.

“When it became clear that no progress was being made between the two parties, we made the move to save the semester,” said Minister of Advanced Education Deb Matthews.

The government tabled back-to-work legislation and sent the two parties to binding arbitration. Many felt that this move was too harsh, while others thought it was necessary to save the semester.

“I’m shocked that a government that calls itself progressive would bring forth legislation that stomps on the rights of workers,” Ontario NDP Leader Andrea Horwath said last week.

Horwath argued the Liberals could have at any time issued a directive to get the two parties back to the bargaining table, but instead waited until introducing back-to-work legislation was the only option. 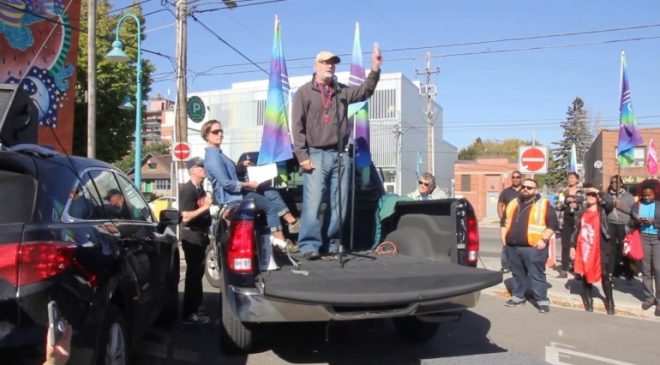 However, under the Colleges Collective Bargaining Act, the government claimed it would have been not able to get involved any sooner than it did.

Despite being against the back-to-work legislation, President of the Humber Faculty Union OPSEU Local 562, Bob Bolf admitted it was necessary to get students back in the classroom.

“During negotiations there seemed to progress, but then the CEC withdrew any and all concessions that they made and presented a forced vote contract which was worse than the one we already had,” he said.

Under the new contract, the colleges could have a preference in hiring just part-time faculty, meaning they would no longer have an incentive to hire full-time faculty.

It would also exempt partial-load and contract faculty from being paid under the provisions of Bill 148, which was proclaimed Nov. 27.

“Faculty wants to teach, but the contract was bad that they had to take a stand because it would affect the quality of education the students are receiving,” Bolf said.

“The forced vote contract was rejected by faculty as expected and that is when the government decided to step in and legislate us back to work,” he said.

The strike may be over, but issues surrounding both the labour rights of faculty and the structure of the college system itself remain.

“Seventy per cent of the faculty are working either part-time or on a contract which is not good for students in terms quality of education,” she said.

Over the next few months, a new contract will be drawn up in arbitration which will hopefully address some of the longstanding issues that face Ontario’s College system.

Bolf hopes some compromise can be made between the two parties with regards to hiring more full-time faculty and giving faculty more rights to academic freedom.

“The faculty being the experts in their fields can best decide what students need to learn to be successful in their future careers,” he said. “Deans and associate deans often do not have the knowledge or experience faculty may have in their particular field.”

Bolf said their contacts and industry experience are often out-of-date, whereas faculty are more up-to-date on changes in their particular fields.

“Each of the eight schools at Humber has such a wide variety of content areas and no one dean could know all of these areas,” he said. Faculty need to have an input to ensure students on academic curriculum to ensure students are getting the most up-to-date educational training.

Some OPSEU leaders have even called to abolish the CEC itself as it is not accountable to anybody, including the Ministry of Advanced Education.

“The CEC directs the activities of all 24 colleges, yet they are accountable to no one and they are interfering with the quality of student’s education,” said Warren “Smokey” Thomas, President of OPSEU.

He says the CEC is running our public colleges like private corporations and they need to be held accountable.
Bolf is confident that faculty will get what they want as more and more people are becoming fed up with precarious work.

“The strike was followed across North America and there was support from workers in many other sectors,” said Bolf.

He says the CEC is following the American system of private colleges as they continue their push to only hire contract faculty.

Despite the negative impact the strike had on students across Ontario, it did spark a major backlash against the rise of precarious work.

The ripple effects of this strike will be felt well into the future.

The strike began on Oct. 15 when 12,000 faculty members from all 24 of Ontario’s colleges walked off the job.