About $4,100 was raised by the about 60 stationary riders at the Athletics Centre, said Tanner Gawley, a second-year Fitness and Health Promotion student. He said a bake sale a week ago garnered about $525. 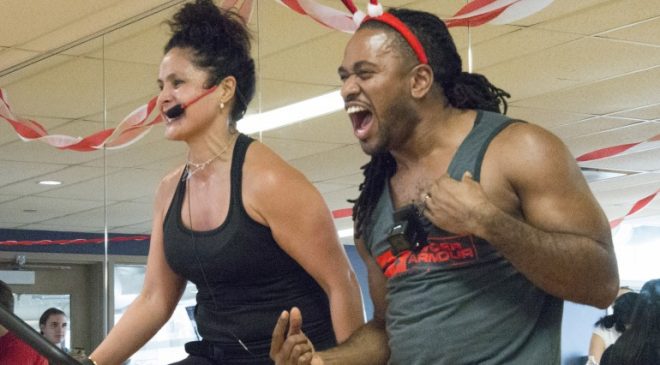 He and classmate R.J. Lacorte said they consider the event was a success.

“Our original goal was to raise $10,000 but due to the strike, we were quite limited in terms of promoting the event, getting fundraising, and such,” Gawley said.

But he and Lacorte say they feel raising $4,600 salvaged their class’s project. And donations could still be made to the college’s United Way drive. The event last year raised more than $13,000.

“Considering we lost five weeks of planning and preparation, I feel with the turnout this year, it was a success,” Gawley said. “If you were in that room, it was packed, they were having a good time.”

Fitness and Health students cheered on sweaty participants, many decked out in holiday attire. Personal trainer Carmen Puyo, who led the class, loudly hyped up riders during the event.

Gawley said a number of people who intended to participate backed out after the original event was cancelled because of the faculty strike that began in October.

Prizes were awarded to top fundraising individuals and teams, for best team spirit and individual spirit. Among the top money-raising teams include the Spoke’n’Word, the Lakeshore Scabblers , the Cyclomaniacs and the Spandex Spinners.