Viewing the nature on Toursday at the Arboretum in fall

The breeze brings fall leaves and the Humber Arboretum wants to showcase just how beautiful the Arboretum becomes during the season.

Students, faculty, and members of the Humber community are given the chance to join an hour-long guided tour throughout the many leaf-covered paths and lush meadows at the Arboretum. 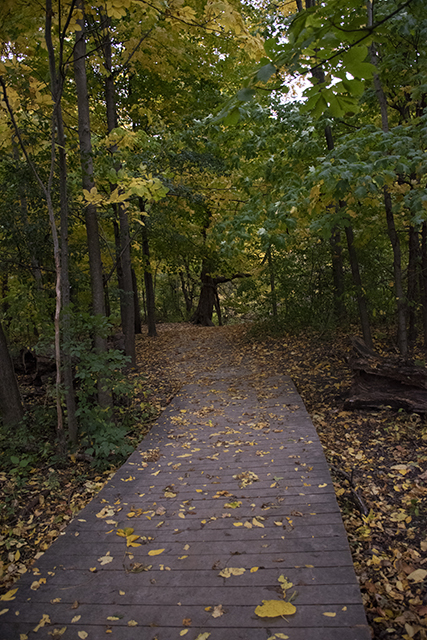 One of the pathways in the Humber Arboretum, covered in fall leaves. (Photo by Elesha Nicholls).

Upcoming guided tours will be held on Thursday, Nov. 8, and Thursday, Dec. 13.

“The Toursdays were meant for a way to connect people with the arboretum,” said Jimmy Vincent, Coordinator at The Humber Arboretum. “We want to showcase the property and the different seasons”

Community member Kelly Farrell said she learned about the fall tours via Facebook.

Farrell, who operates her own private school called Oak Learners, decided to to bring a student along to the October Toursday to learn more about the Arboretum.

“A part of our curriculum is based on sustainable living,” she said.

Farrell said the fall tours were helpful in learning about the change nature goes through in a new season.

“Sometimes natural areas are a barrier to people,” Vincent said. “Think of the tour as an intro to nature where people can come out and learn with a person they feel safe with.”

He said he is looking forward to the many events the Arboretum will be hosting in the next coming months, such as the winter tours days and lunch and learns.