The Battle of Vimy Ridge was a rousing Canadian victory that inspired the birth of our nation. It’s a moving narrative taught to our children and championed by our government for decades. But how much of this is reality?

“Vimy Traps: Canadians and the Contested Memory of World War One” was the second President’s Lecture Series of the Fall 2015 term.

“The first (Vimy) trap is to imagine World War I as a birth of a nation,” said McKay.

“The idea that Canada was born at Vimy Ridge is not easily located in the 1920s or even up to the 1960s,” he said. “We often find that returned (Canadian) soldiers were the war’s fiercest critics.”

He highlighted wartime photographs and works by Group of Seven painter Frederick Varley to gain insight into Canadian perceptions at the time. “For What?” completed by Varley while an official war artist, is a striking landscape painting of a cart piled with dead soldiers. It is one of several Varley works that convey the unseen horrors of combat. 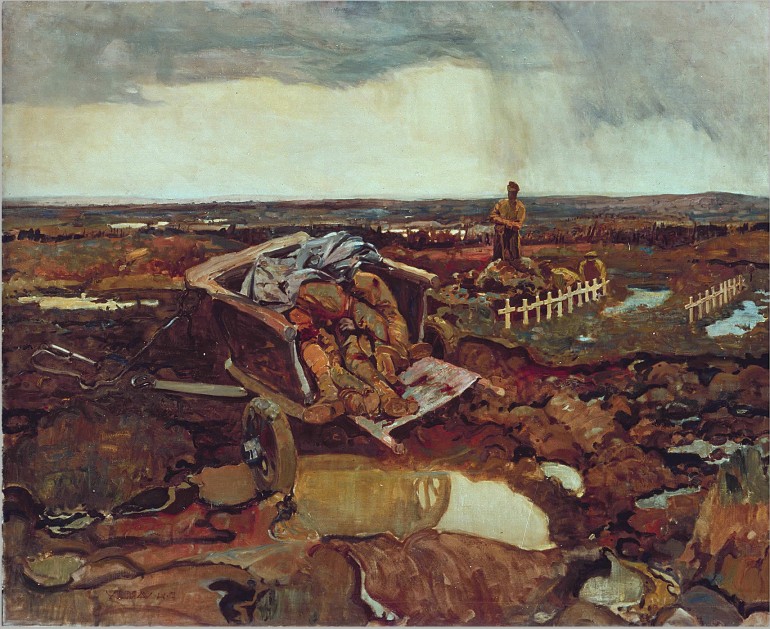 Group of Seven painter Frederick Varley’s “For What?” conveys the unseen horrors of World War I combat. (Wikimedia Commons)

“The images really brought the message home,” said Daniel Caudle, a first year Journalism student who introduced McKay to the audience of students and academics.

McKay said today’s martial nationalism movement has co-opted the battle for political propaganda purposes. This is also known as “Vimyism”.

“Vimyism” is a narrative that trumps up Canada’s involvement in Vimy Ridge as a heroic and noble cause that sparked its true independence on the world stage. This viewpoint is advocated today by academics such as historian Jonathan Vance and celebrities like Don Cherry, he said.

McKay noted that Canada’s documented practice of shooting German prisoners and using chemical weapons during the war is typically ignored by Vimyists.

“I think in recent years we’ve seen an attempt to cleanse this war of its complexities, to rehabilitate it and make it a rah-rah moment for Canada,” he said. “I think this is a moral, empirical, intellectual error and should be combatted.”

“Canadians have always disagreed about this war,” McKay said. “So don’t make it the foundation of true Canadianism.”

The lecture came with Remembrance Day less than a week away.

“We thought it was an interesting topic and a timely one,” said Ian Gerrie, chair of the President’s Lecture Series committee.

Gerrie wanted to bring in a speaker to challenge traditional Canadian narratives on World War I and explore what often gets omitted.

“I think to get a different perspective on that, to notice what messages are left out, is a very good step in thinking critically about our history,” he said.

He invited students in his “Contemporary Moral Issues” class, taught as part of the General Arts & Sciences program at Humber College, to attend the lecture.

“It was very informative, I’m usually not interested in these discussions,” said Shideh Pourfarshomi, a second-year student in Gerrie’s class.

McKay and co-writer Jamie Swift are planning to publish a book on this subject, tentatively titled “The Vimy Trap”, to coincide with the 100th anniversary of Vimy Ridge in 2017.

The next PLS lecture is “Bridging the Divide Between Police and Community” with guest speaker Jamil Jivani on Nov. 25. A video archive of previous PLS lectures is available at mediaservices.humber.ca.