Volleyball team continues to impress with another commanding victory

It is extremely early in the season, but Humber’s women’s volleyball team has yet to lose a set.

“We did a good job against a good team tonight,” said Hawks head coach Chris Wilkins. “I was pleased with our girls, our level of effort, and us staying to our game plan and what we wanted to do. We made a good team look average.”

Wilkins is happy with the performance of his team, and rightly so, but they have played only four while some have played six. The Durham Lords are 6-0 and the Niagara Knights are 5-0, both with very similar stats to Humber, who is sitting at 4-0. Both Durham and Niagara however have lost three sets each.

“We pulled through, played the Humber way,” said Hawk’s Breanna Golding, “We did get some encouragement from the coaches, just to pick up some players that were having some difficulties, but other than that we definitely brought our A game by the end of it.”

The Hawks lost a few veterans last year, but their six rookies have done more than impress according to the coaching staff.

“They’ve looked really good, definitely contributed to our team a tremendous amount,” said assistant coach Taylor Hutchinson. “We lost a lot of key players last year, but it’s been made up for by these rookies. They’ve been doing a really good job at adapting to how we play, our style of ball and just what Humber is all about.”

“They bring a lot of energy to the team,” said Wilkins about the rookies. “They work hard, they push the veterans, and it’s a tribute to our overall group. They play fearless, feed off the veterans and the veterans are showing them how to succeed. It’s a nice thing to watch.” 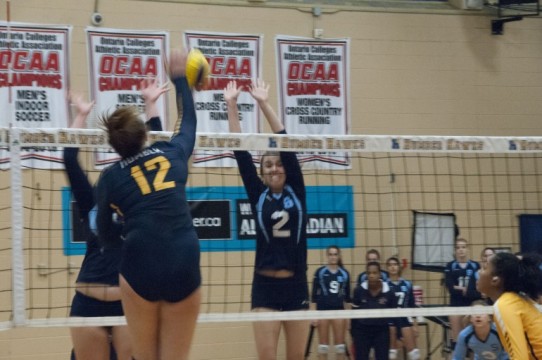 Golding said the most impressive thing about the team so far is how quickly they’ve been able to gel.

“The majority of us are rookies coming in, so we’ve really been focusing on the team bonding aspect and making sure that we all work together and make sure that we have each other’s back,” said Golding. “I’m really proud of us for that, we come through for each other every time.”

Despite the dominating start, the coaching staff thinks there’s room for improvement for the team. Wilkins said that consistency is one aspect the team can improve on.

“Staying focused in the moment, controlling things on our side of the court,” said Wilkins. “We get ourselves in a little bit of trouble where we lose focus and I think maintaining that level of focus and effort is important for us.”

“Our communication, I think we can improve on a little bit,” said Hutchinson. “I think taking that next step and always being ready and never taking any points off. Being more consistent with that and playing our style and not worrying about what’s on the other side of the court.”

The Hawks head down to Niagara to face-off against the high-ranked Knights on Wednesday Nov. 23 where one undefeated team will leave with a loss.