Women head into the break undefeated 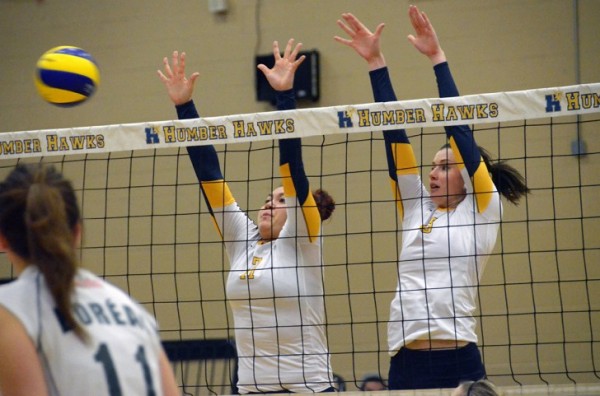 PHOTO BY GEORGE HALIM
Carley Uden (left) and Ally Newman go up for a block first as Humber routed Boreal 25-3 in the first set at home, on Dec. 1.

The league-leading Humber women’s volleyball team was too much for both Cambrian College and College Boreal in the weekend stretch.

The Hawks didn’t miss a beat, winning both contests in straight sets, en route to a perfect weekend.

“We’ve sort of maintained a role within ourselves to say that we want to get better on the court regardless of who’s on the other side,” Wilkins said.

With half the season gone, Wilkins said trying to run new plays that the team was not accustomed to was part of his game plan, regardless of the outcome.

“There was a couple new plays we were trying to implement and it just wasn’t quite working for us,” Wilkins said, adding, “but we were trying to execute something and it’s nice to see that we kept trying, anyway.”

According to Wilkins, that’s what the weekend was about – working on the fundamentals and getting better.

Across the court, Boreal head coach Jamie Erven said his women came out knowing they were up against the nation’s best, but it didn’t stop them from holding their own.

“We were focused on playing technically well, committing to our defensive positioning,” Erven said. “We knew they were going to be a strong team, we weren’t expecting to run the table on them.”

Erven said the second set was a sign of things to come from his fairly young team, but bouncing back is key.

“It’s kind of been the story of our season so far,” he said. “We have a slow start, we usually have a really strong second set, and then for some reason we slide off the table a little bit again in the third.”

The Hawks have only lost two sets to date this season through nine matches, but third-year sport management student and outside hitter Taylor Hutchison, said it has more to do with chemistry than talent.

“We wanted to be really focused but at the same time have a lot of fun,” said Hutchison.

The West division-leading Hawks, who are third in the nation, will resume their season on the road Jan. 10.