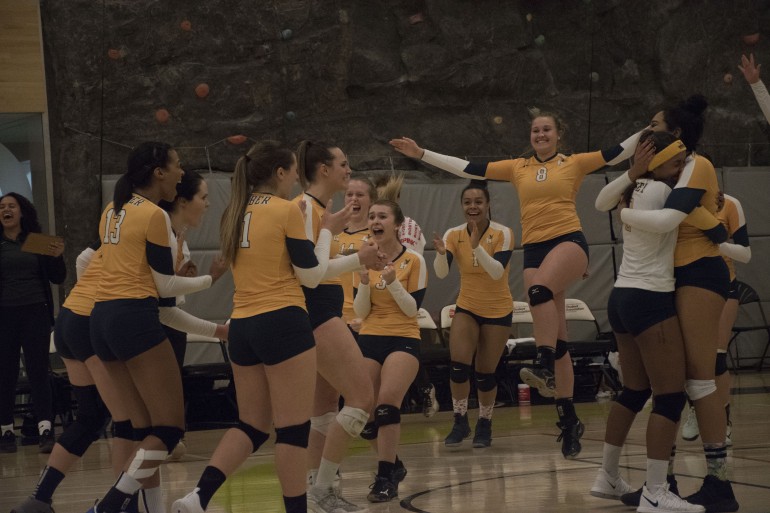 The Hawk’s women’s volleyball team celebrates after their victory against the St. Clair Saints in the OCAA semi-finals on Friday. Kyla Wilkins (No. 2) hugs Breanna Golding (No. 10), while players rush off the bench to join their teammates.  (Bobby Mihalik)

The Hawks came out victorious at the OCAA championships held at Centennial College in Scarborough last week after finishing the regular season with a perfect 18-0 record.

But the quest for gold isn’t over as the team now sets its focus on the Nationals in Grande Prairie, Alta.

Defeating the Niagara Knights in the gold medal game on Saturday, the Hawks extended its record number of consecutive OCAA championships to 11, and their 13th in the last 15 championships the team played. “We’ve been pretty lucky,” coach Chris Wilkins said of his team’s success.

“We’ve been pretty fortunate for a while now.” Wilkins has been there for all of the titles, but the excitement of winning doesn’t get old.

“Last year when we won, it felt great to win then,” Wilkins said. “I thought ‘that’s a decade, that’s great’.”

“But now we win this year, and it feels great as well. Every time it just feels good,” he said.

The Hawk’s tournament got off to a rocky start in the quarter-finals against the Mohawk Mountaineers. Losing the first two sets to the Mountaineers, the Hawks were pushed to the brink of elimination before ultimately winning the match in five sets.

The quarter-finals match mirrored a tilt between Humber and Mohawk early in the regular season. On Nov. 10, the Hawks also dropped the opening two sets to the Mountaineers before winning in five. 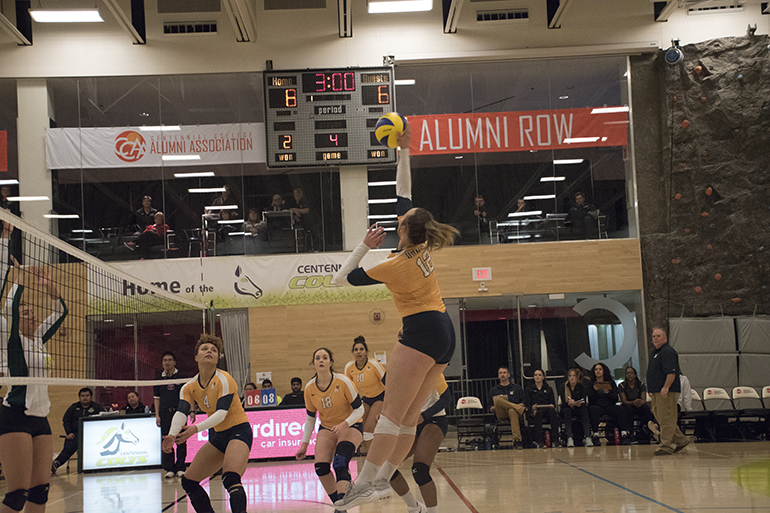 “That was one of the ones where we’ve been pushed the most, out of my four years here,” Hawks libero Kyla Wilkins said.

After surmounting Mohawk, the Hawks faced off against the St. Clair Saints in the semi-finals, winning in four tightly-contested sets.

Growing increasingly dominant as the tournament went on, the Hawks met the Niagara Knights in the finals. This time the Hawks took care of business in three straight sets, highlighted by a second set blowout score of 25-7.

“I felt like as the tournament went on, we got a little bit looser, and we started playing our style of game, and things got better for us,” Wilkins said.

For the Hawks players, being a part of the OCAA championship victory is incredibly special. “I don’t think I’ll ever get used to that feeling of actually winning the medal,” outside hitter Breanna Golding said.

“We’ve gone to work since training camp back in August, and it feels good and really rewarding to see everything come together,” she said.

With another OCAA championship in hand, the women’s team can now look ahead to the CCAA national championships. Wilkins says his team is ready.

“Of all the years, I think we’re prepared the most this year,” he said.

“We’ve got a really good, deep team.” “We’ve got things to prove. We’re not satisfied with just winning the OC,” he said.

The CCAA championships begin March 8 with the Hawks facing off against Élans de Garneau of Quebec City.