Humber Women’s Soccer team remains undefeated along with keeping a clean sheet half way through the regular season.

Vince Pileggi Humber Hawks coach said they had a very good start to the season.

He added they are able to play extremely well and were able to get all wins.

“Coming in to the game the Hawks are placed first in their division and fourth in the league. The team scored 22 goals in four games and their strong defense has yet to allow a goal,” he said. 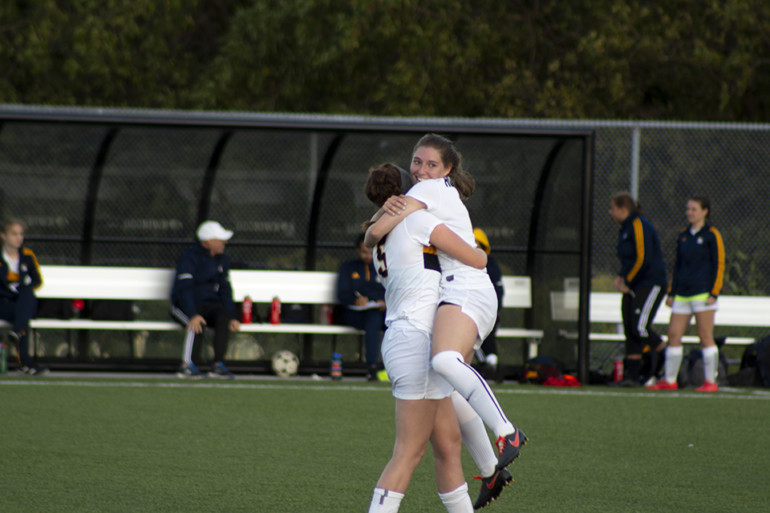 Pileggi credits the team’s performance to a “total team effort.”

That is going to be challenged at home tonight by the Sheridan Bruins, who is also undefeated. Both teams are 6-0.

The edge, on paper at least, goes to Humber’s footies, with a 36 goal differential. The Bruins have 18 goals for, three against for a 15-goal differential. Humber scored an average six goals a game compared to Sheridan’s three.

Mauro Ongaro, co-coach of the Hawks, said Sheridan is definitely their top conference rival but he’s confident the team is ready to take them on.

“I feel like we’re ready to face them and I think that we’ll win it. This is the next step for our team,” he said.

It was Humber’s prowess on the field that made George Brown Huskies coach, Leslie Fitzpatrick, say he doesn’t underestimate the power of the Hawks. But it didn’t stop the onslaught Sept. 26 in Game Five as the Hawks shredded the Huskies 9-nil.

“Playing the number one team in the division is always going to be a tough game but it’s soccer, you never know what’s going to happen,” he said.

Striker Zoe Longsworth led the way early for Humber scoring two goals in the first half with help from Nicole Lyon, who also scored once, and Taylor Thomson, who tallied with two goals.

By half time, the Hawks led 4-0. Shaniece Bennett contributed two goals of her own with Rebecca Spratt and Megan Voutour also pitching in to what was an overall team effort win.

“The depth, experience, and quality of their team just showed and giving up the early goal put us behind the eight ball,” Fitzpatrick said prior to Huskies’ loss.

Pileggi said when they start the game, they want to have a proper warm up and be ready to play and score quick. And they did, scoring at 1:13 in the first, and at 1:13 of the second half.

Centre back Mikaela Zeballos played her first game after missing the last two games due to an injury.

Longsworth said she feels good after scoring two goals against the Bruins — making her the team’s leading scorer with five. She intends on being the leading scorer in the league.

To that end, Longsworth says is looking forward to playing Sheridan on Wednesday.