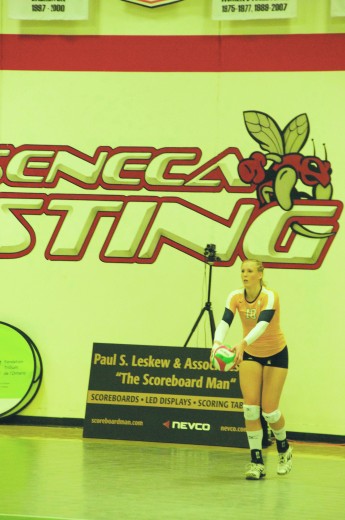 Kelly Nyhof appeared in her final tournament as a member of the Humber Hawks. (ARI SALAS)

Humber’s Women’s Volleyball season came to a close with a disappointing finish at nationals, but the team continued its provincial dominance.

Head coach Chris Wilkins says inconsistent lineups and an injury-riddled season left the team unprepared for national competition. He said he thinks next year’s team will be top three nationally.

The fourth seeded Hawks had one victory and two losses at the CCAA Nationals. Their final loss came against the Mount Saint Vincent University Mystics, resulting in an eighth place finish for Humber.

Humber has won the OCAA championship in seven straight years. Athletic director Ray Chateau said there is a lack of competition within Ontario.

“It was a disappointing end to a good season. When we get up against quality teams from the west it shows the lack of competition in Ontario,” said Chateau.

“We base our practices on how we’re going to perform in nationals,” Hutchinson said. “In Ontario we don’t have the competition so we don’t know how to prepare as well as we’d like to. This year it was a bad time to have a bad game. I’m looking forward to next year and know that we can improve.”

Hutchinson said the team needs to work on the mental side of the game.

“We’re in our heads a lot, we need to focus on just playing our game,” she said.

Wilkins said that it will be impossible to fully replace Nyhof on the court, but like many times before, players will step up.

“We’re going to be relying on our strong players coming in next year to fill that role,” Wilkins said. “I think we’re going to be even more balanced. I think it will be one of the strongest teams that Humber’s ever had.”

Hutchinson said Nyhof was an ideal captain both on and off the court. She said players will need to step up and become leaders in her place, and that she hopes to be able to do that herself.

Chateau said that Nyhof’s biggest legacy is that she was able to reach the national team through Humber’s program.

“She has been a great player, had a great career and has been an excellent ambassador for Humber,” said Chateau.