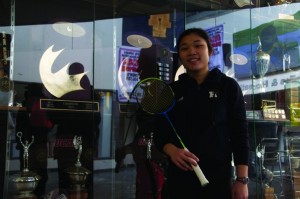 Tracy Wong was half of the team that won a CCAA silver medal in mixed doubles badminton. (Ari Salas)

After a remarkably successful badminton season, Tracy Wong is confident she will only improve as she prepares for her final year of collegiate competition.

Wong competed in the CCAA National Championships in Edmonton this year, which ended Mar. 1. She returned to Humber College with a silver medal in mixed doubles, won with her partner Andrew Lau.

“Next year I’m hoping to get gold at nationals, this year we were slightly off,” said Tracy.

Wong said that despite the stellar season, she was disappointed in missing the gold medal. She hopes to improve over the offseason and fight for it next year.

Her older brother, Ray, coaches Wong. He says her success is a result of the love for the sport she has.

“She’s dedicated to it and has committed to it,” the older Wong said. “She really listen and tries.”

Ray says he was happy with Tracy’s performance at the CCAA championships in Edmonton but is already focusing on next season.

“The match was great, it was really intense. She can always improve mentally, physically and skill wise. It was a good experience for her, I’m looking forward to next year.”

Tracy said her plan during the offseason is to develop her skill set and strengthen mentally.

“From this tournament what I’ve taken is that I need to learn from it, it’s not just physical,” said Tracy. “I need toimprove my mental game as well.”

One area where she says she needs improvement is mixed doubles.

“I’m a singles player and this year I played mixed. My technique was there but with mixed it’s a complete mental game. It was different and in that sense really challenging for me.”

Associate director of athletics Michael Kopinak attended the championship in Edmonton. He said Tracy and the badminton team are a source of pride for Humber College.

“It certainly puts Humber on the athletic map, recruitment map and badminton map,” said Kopinak. “She is one of the most decorated female athletes in Ontario college history.”

And as for her accomplishments, while Wong may be critical of them, Kopinak praised her ability.

“Being second in Canada is nothing to sneeze at by any means. Tracy now has four national medals in four attempts and that’s pretty damn good.”