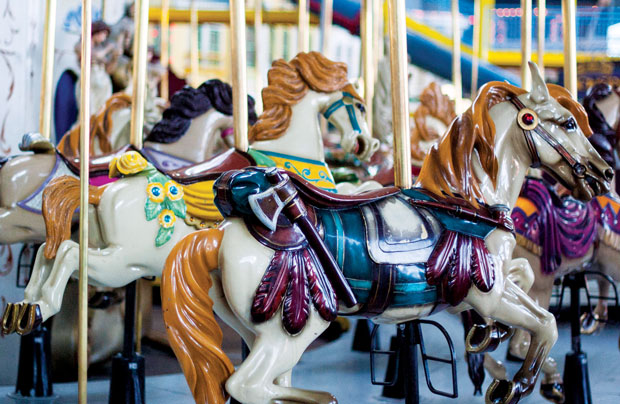 Charles I.D. Loof installed his first carousel at Coney Island, New York. Today only 13 of his carousels remain in operation including the one at Woodbine Mall Fantasy Fair. Photo by Danielle La Valle.

There is a 103-year-old hidden gem at the Woodbine Fantasy Fair.

The Charles I.D. Looff carousel, built in 1911, is one of only 13 still in use in the world. According to the Fantasy Fair website, the carousel was acquired in 1985.

Since then, it has attracted riders both young and old.

“Lots of people come to hear the music of the carousel, especially elderly people,” said Olja Lavriv one of the supervisors at the Fantasy Fair.

“Lots of senior citizens from the nursing home come during the week. They just want to ride on the carousel because it reminds them of their younger days,” said Lavriv.

Simple acts of pleasure, like riding a carousel, may seem silly or frivolous, but they can help relieve stress and process the less pleasant aspects of life, said Sonja Embree, assistant program head of psychology at University of Guelph-Humber.

“Things like riding a carousel that hearken back to a time of childhood and innocence are a way to relieve that stress that is there in our daily lives when we are bombarded by all this information that can be quite despairing,” Embree says.

The creation of new memories is also an important part of the carousel.

Lavriv said the carousel is a popular spot for wedding and engagement photos. Anyone can use the carousel for a photo shoot by purchasing a permit for $60 from the Woodbine Mall management office.

The carousel also offers parents and children a chance to bond over memories of riding carousel.

Raj Sukhnanan has only taken his daughter to the Fantasy Fair three times, but already the carousel is a big hit with both father and daughter.

“The carousel is what I used to go on when I was a little boy, so I love coming here, I love taking photographs,” he said. “I do enjoy going on with her.

“It brings back some good memories and hopefully she will enjoy it, too. As she gets older, her memories of that should be just as what I had back in my days.”