Entering the modern job market fresh out of school is daunting for young people. This stress is only compounded for a new immigrant or a person of colour.

An event called 360: Propelling Youth Employment in the GTA, a collaborative forum to prep young professionals for just this, was hosted at Humber Lakeshore by 6 Degrees and Toronto Pearson’s Youth Cohort program.

The first half of the event, the coffeehouse session, started with icebreaker conversations about what it means to be a young professional in today’s career landscape. 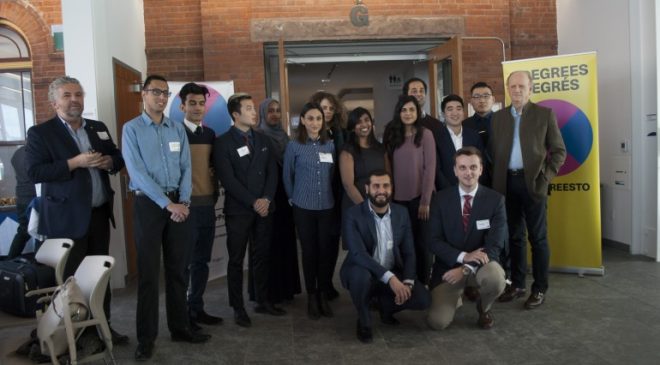 Organizers and event managers pose together after the 6 Degrees event about youth employment in the GTA at Humber’s Lakeshore campus on Dec. 13. (Clement Goh)

Organizer and director of 6 Degrees Alain Pescador believes Canadian values like diversity and inclusion are keys to better hiring practices.

“We’re doing good, but we still need to do better,” Pescador said, citing a push for employers to focus on minority groups.

“And so, we’re here to do this event, along with a partnership [with Toronto Pearson Airport’s Propeller Project] because we’re interested in being in the discussions to those communities that don’t get an opportunity to be involved,” he said.

A special microphone cube was passed around by audience members asking questions of the speakers in the 360 session.

The session focused on a lack of government support, from mental health services to not having enough opportunities for marginalized communities.

“Unless you know someone who’s in there and you’re confident enough and doing enough to actually build a network and make a network, it’s kind of hard to break in,” Kannan said.

John Ralston Saul, the co-chair of the Institute for Canadian Citizenship (ICC), said that despite having partnerships and benefits at school for employment, young applicants have to go an extra mile.

“If the employment systems don’t work, then people might get an education and then they’re stuck,” Saul said.

“From a 6 Degrees point-of-view, you have to figure out how to build those ideas back into the national, international (levels). You have to be thinking to yourselves ‘are there particular issues that we should be taking up?’” he said.

As a forum, 6 Degrees hosts an annual series of events from Toronto to Vancouver. Its flagship event, called Citizen Space, brought figures such as artist and activist Ai Weiwei for discussions at a three-day conference in Toronto in September 2017.