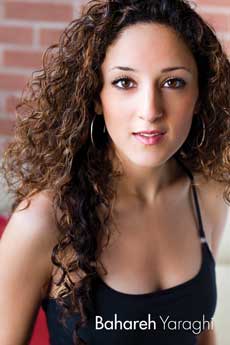 In 2011, Yaraghi was nominated for two Dora Awards for Best Actor and Best Ensemble. Photo Courtesy of Dan Hashemi

From Iran to Vancouver to finally Toronto, Bahareh Yaraghi has come a long way.

A graduate of Humber College’s Theatre Performance program in 2010, she has since been nominated for two Dora Awards for Best Actor and Best Ensemble and the Equity Emerging Theatre Artist Award in 2011.

“A performer since she was a kid,” Yaraghi always knew that acting held a piece of her heart.

So why did she choose acting?

“I just simply love it. It’s always been my passion in life,” Yaraghi said. “I love digging into stories and finding the true essence of what’s really being told and sharing stories that come from different parts of the world that you find yourself so drawn to.”

Her epiphany, when she decided to turn to acting, came while she was studying to take her LSAT for law school after finishing her Anthropology undergraduate degree at McGill University with a double minor in French and Sociology.

“That’s when I decided, ‘I need to try this.’ It’s been my number one love since childhood, so I just need to try going into theatre,” she said.

Telling her parents was not as hard as one might have thought.

“I’m lucky that my parents have been quite supportive since the start,” Yaraghi said.

“They’ve always emphasized that no matter what I chose to do, to make sure that I’m passionate about it and that I have a drive for it.”

She moved from Vancouver to Toronto in the summer of 2006 because there are more opportunities and started at Humber’s theatre school in 2007.

“I have to say, after eight years of being in this city, it’s now home. I love Toronto,” Yaraghi said.

Thinking back to her time in Humber, Yaraghi said she does not regret a second of choosing to study here.

“Humber truly gave me skills I never thought were possible,” she said.

“Physical theatre and collective creation are emphasized at Humber, and I simply love it. It teaches you how to use your body to tell the story, along with the text, and with collective creation you learn how to hone your own personal artistic voice, which is so crucial.”

She keeps in touch with her Humber classmates.

“We were a family when we studied together,” Yaraghi said. “And many of us are still quite close”
She has starred in more than 10 productions. In her third year she starred in Modern Times Stage Company’s Hallaj.

As soon as she ended her studies she was cast in two Shakespearean plays, eventually signing with Edna Talent Management.

In the beginning, booking roles was not as hard for her because she auditioned for everything she could.

She currently stars in The Moment playing at SideMart Theatrical Grocery on 1362 Queen St. E. until Nov. 22, which is based on a play by Deirdre Kinahan.

She first heard about this Irish drama when she was reading plays at the Toronto Reference Library.

It is about how a family is trying to deal with a horrible act of violence committed by one of its members, coping after seeing their son and brother return after many years, with his wife Ruth, played by Yaraghi.

During the two-hour play, the on-stage talent captivated the audience, some moved to tears and crying when the actors did.

Yaraghi also plays another character, Hilary, who was one of the sister’s best childhood friends.
Yaraghi has her own thought as to why the play is called The Moment.

“One moment in someone’s life can change so much for that particular individual and can ripple down to so many other people around them. One moment – that’s all it takes,” she said.

Memorizing lines is tricky for actors but Yaraghi has her own method.

“Lots and lots of rehearsing. On my own and with my cast mates,” she said.

Paul DeJong, program coordinator for Humber’s Theater Performance Program, said he was thrilled to hear about her getting this opportunity.

“I am delighted to see the impact she has had on this company,” he said. “It says a lot about the theatre program’s dedication to training actor and creators, especially artists who move out into the world to shape the theatre of tomorrow.”

Christopher Stanton, director of The Moment, said he has seen Yaraghi’s previous works and describes her ability as “remarkable.”

“She is very committed to getting at the fundamental honesty in her characters, and she is better every time I see her,” Staton said.

“She’s also fearless. She will literally throw herself into the part, physically and emotionally,” he said. “Not only that but she works from the heart. She’s willing to put her own ego on the back burner for the good of the overall piece, which I think is crucial in creating theatre.”

Yaraghi didn’t audition for the roles. She has been a part of The Actors Repertory Company since 2012, which cast the show internally. Stanton said it was he who decided to double-bill her and that he knew she would make an “excellent Ruth.”

“I made the dramaturgical choice to double her as Hilary because it made thematic sense in a play about not being able to outrun the ghosts that haunt us,” he said.

Andre Sills, Yaraghi’s co-star in the show and also a friend, said she is a very generous acting partner.

“She is a hard worker and cares deeply about this profession,” Sills said. “She is always there for you as a scene partner, and always looking for ways to make her work and the work as a whole better.”

Sills said the roles were destined for Yaraghi.

“She was a perfect fit with her history of movement and dance, she even choreographed the basement dance. With that and the natural beauty that is Ruth, she really brings those two characters to life,” Sills said.

“Bahareh is a brilliant source of light in any room,” Stanton said.

For upcoming actors, Yaraghi has some advice.

“Keep auditioning, keep learning, and keep taking classes. You will be a lifelong student in this craft. And that’s so very exciting,” said Yaraghi.

For those interested, ticket information is at http://arcstage.wordpress.com, but be quick as there is a limit of 30 people in the audience per night.

Torontonians can see Yaraghi next in Nightwood Theatre’s Her2 in January and Modern Times Stage Company’s Blood Wedding in March.